Yamaha’s Arius series covers a lot of ground between beginner and advanced instruments. In this review, we are looking at the YDP-103, a solid entry point to the Arius range.

The Arius YDP-103 is a simple, no-frills digital piano. There are cheaper alternatives that offer more features and more gimmicks, sometimes at the expense of the sound or feel. If you buy the YDP-103, every penny is going towards the sound and feel, nothing else. So, in that sense, it’s a solid choice for any beginner/intermediate player looking to spend around the $1000 mark.

It suits beginners and will last through to an intermediate level.

There are two ways to look at AWM Stereo Sampling. You could look at more expensive Yamaha digital pianos and wish the YDP-103 had that CFX Concert Grand sound, too. In all honesty, the CFX sound is better than the grand pianos on the YDP-103.

However, the other way, and the right way to look at it, is in the context of price. Compared to similarly priced digital pianos, it’s amongst the best for sound quality.

One of the areas where the YDP-103 performs very well is in creating the illusion of space. The grand piano sounds have a real depth that creates ambiance and atmosphere.

The max polyphony of just 64 notes could be better.

Part of the charm of the Grand Piano sounds comes from the delivery of the built-in speakers.

On paper, a pair of 4.7″ speakers and two 6 W amplifiers don’t fill you with expectations.

But, it has to be said, the built-in speaker system performs better than expected.

It’s not a powerful setup that you’d use for many performances, other than a small piano recital or playing for family/friends at home.

What it lacks in power, it makes up for in clarity – very nice.

The YDP-103 comes with Yamaha’s Graded Hammer Standard (GHS) keyboard. Being graded means that the keys get lighter as you increase in pitch, like a real piano.

As an entry-level Arius piano, the YDP-103 doesn’t feel as good as the higher-priced models. If you go right to the top of the range, there’s quite a significant difference.

What the YDP-103 does well is that it has a smooth progression of weight without any unusual transitions. Where it goes wrong is perhaps in the overall weight, which might be slightly light.

Again, this is an area that you have to keep in context with the price. It comes with matte black keytops that absorb moisture and provide more grip during a performance.

It’s great for beginners and early intermediate players. Once you progress through that mid-level, you’ll start to outgrow it.

As we said at the start, the YDP-103 isn’t a feature-rich digital piano, but there are still a few to mention.

The built-in effects start and end with four Reverb types. We did warn you that features were limited!

However, we should say that the Reverbs do add to the overall piano experience.

There are two modes available, Layer mode and Duo mode.

Layer mode lets you combine two voices to create a unique voice. If you are big on power ballads, you can layer piano and strings and sing your heart out.

Duo mode creates two identical zones on the piano for student/teacher lessons. It’s a feature that is very handy for beginners in their first years of playing.

It provides a far more visual interface via your smartphone or tablet. Even though the YDP-103 only has 10 voices, it’s a much easier way of making selections.

There are 10 voice demo songs and 10 piano preset songs. It would have been nice to see some more educational content since the YDP-103 is aimed mainly at beginners. But, it’s not exactly a deal-breaker.

So, we have been a little harsh on the YDP-103 so far when pointing out its shortcomings.

However, there is one overwhelming positive, which is that it’s lovely to play. As a beginner, you aren’t going to be comparing it to pianos with a more realistic feel. You are going to be too busy getting used to playing with keys that have some weight in them.

As a steppingstone, it’s absolutely perfect.

The controls layout is minimal, but as we said, the Digital Piano Controller app makes it easier.

With some digital pianos, you get the potential of using them on stage as well as at home (if you want to put effort into moving them). The YDP-103 isn’t one that we would suggest for the stage. It’s meant for the home, and for the right user, it could be a perfect choice.

As dull as it might sound, it performs very well because it does what it’s supposed to, no more, and no less.

Some digital pianos in this price range don’t have a traditional upright piano design, but the YDP-103 does. Albeit not a very tall upright, but we still like the design.

Having said that, it’s noticeably less rigid than models higher up the Arius range. So, if the build quality is a critical factor for you, it might be worth saving up a little longer.

If we come back to the most important word again, context, it’s on the same level as its competitors (at least most of them).

There isn’t a whole lot in the way of connectivity, but the first thing we noticed is that there are two 1/4″ headphone jacks. That means you can use Duo mode in silence without disturbing the entire household.

Other than that, all you get is a single USB Type B port. Not overly impressive, but unlikely to deter a beginner.

As a beginner, you have a lot of choices, and you should buy the one you think will help you develop most/fastest. Also check out our pick of the best digital pianos in 2021.

The YDP-144 will cost a little more, but you get the CFX Concert Grand sound for the extra money. If you can afford it, it’s worth it.

If you want something a bit cheaper and more compact, the LP-180 might suit you. Overall, we think the YDP-103 edges it, but check out the Korg if you have limited space. 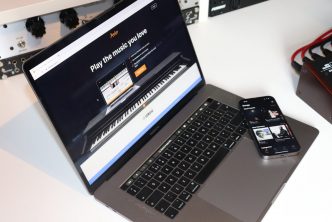 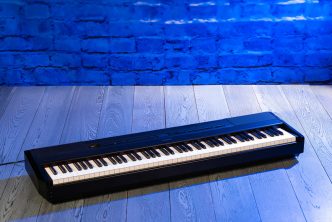