The Roland RP701 replaced the earlier RP501R, it’s an 88-key digital piano that sits in the intermediate range but has a few genuinely premium features.

It blends the traditional piano look with modern touches in a relatively small package.

Our RP701 review will discuss the sound and feel of the piano and see how it stacks up against the competition.

We’ll also look at any important features and shortcomings the RP701 might have.

It’s difficult to say anything bad about the RP701, it’s such a fantastic instrument.

The only real negative we can find is that anyone who only needs a realistic piano sound and feel might be best buying something cheaper. But, the RP701 provides that and so much more.

If you have the budget for it, it’s money well spent.

The RP701 is powered by Roland’s SuperNATURAL sound engine. We’ve lost count of the number of times we’ve said we love this sound engine, even though it’s been around for a while.

On that note, we are glad to say that the RP701 features the newer BMC chip, which is vastly more powerful than its predecessor.

In terms of sound quality, you get a far more detailed sound with many more levels of nuance and resonant/mechanical artifacts that create a realistic piano tone.

The grand piano voices are gorgeous, rich, and dynamic. It’s worth noting the difference at lower volumes, too; the dynamic performance is still just as crisp.

There are 324 sounds in total, which is too many to detail, but we like to mention the electric pianos at least.

We pick out electric pianos often because, for lack of a better description, you can often tell they are secondary sounds from a digital piano, almost an afterthought.

They typically (with some exceptions) lack the attack, bit, and authenticity you get from a top keyboard piano/workstation. On the other hand, these electric pianos would give most a run for their money.

The built-in speaker system consists of two 4.7″ speakers and a pair of 12 W amplifiers.

On the surface, that’s around average for the price range, although it’s larger speakers than some and less powerful amps than others.

To an extent, it doesn’t matter; what matters most is the clarity of sound.

Like most digital pianos, you’ll hear a difference if you take a line out, play through some high-end monitors, and then compare that to the built-in speakers.

But, in a small room, these speakers sound great and articulate enough to capture any subtle emotional or dynamic nuance in your performance.

Although the price of the RP701 could be called intermediate, the feel of the keyboard is more on the premium side.

It features Roland’s PHA-4 Standard keyboard with progressive hammer-action keys and escapement. The weight of the keys is very good, it’s not too heavy, but you have to work for it, and that’s how it should be.

The best thing about the RP701 keyboard is that it encourages the player to explore dynamics, and that’s perfect for beginners and advanced players.

Once you get used to the weight, it gives you the confidence to play with unfiltered expression because you expect what you put in is what you’ll get out.

Another lovely feature of this keyboard is that the keys have a simulated ebony and ivory feel. The simulated feel isn’t just cosmetic; it has a moisture-absorbing effect that provides additional grip.

The RP701 has more notable features than many digital pianos; here are some of the main ones.

When practicing in headphones, as many players do, you don’t get the most natural sound because it’s not how we hear things in the real world.

The progressive action damper pedal is another premium touch we love on the RP701.

Playing an acoustic piano takes some physical effort. The resistance from the keys and pedals helps us develop actual control of expression. Having a more realistic pedal action is a welcome feature.

There are 377 onboard songs with the RP701. The included songs cover a wide range of classical music, traditional music, and helpful practice pieces.

It’s not the most extensive collection of effects. Still, you get some brilliance and ambience controls, particularly useful on grand piano tones.

TwinPiano mode is commonly referred to as Duet mode or Partner mode elsewhere. It creates two identical pitch zones on the keyboard for student/teacher practice.

As we always say, all pianists should record practice sessions or performances for critical listening later.

You can plug in a USB drive and save your recordings, which is an excellent way to archive your progress.

Sometimes we worry that digital pianos with so many sounds and songs will be littered with too many buttons or be incredibly tedious to use. The RP701 is neither.

Thanks to a handy OLED screen and main encoder, browsing sounds and songs is quick and easy. There’s even a dedicated undo/back button that sets you on the right path if you go a little too far.

It has basic transport controls and enough dedicated buttons to provide simple functionality without overloading the top panel.

There are no real complaints over the build quality, but we have to keep our score sensible because it’s not the most substantial unit.

It’s not exactly a streamlined digital piano; it does have a traditional style, but the cabinet is on the smaller side of the traditional. So, it will never have the weight to be as robust as larger units.

However, everything is well put together, and we love the controls. The modern buttons bring the feel of a high-end keyboard piano, and they look great, too.

Connectivity starts with two USB ports (Type A/B) and dual headphones jacks. We always like to see two headphone jacks; in this case, you get one 1/8″ and one 1/4″.

You also get a 1/8″ audio input (AUX) and Bluetooth connectivity. There are no 5-pin MIDI In/Out ports, but you have MIDI over USB/Bluetooth.

The RP701 is a significant improvement over the older RP501R, but here are some interesting alternatives. You can also check out our picks for the best digital pianos and the best 88-key keyboards currently on the market.

The C1 Air is one of the best slimline digital pianos you can buy. It could be for you if you prefer a sleek, modern image. It has outstanding acoustic and electric piano sounds.

If you want that sleeker, modern image but want to stick with Roland, the F701 is an excellent choice. We think the RP701 is better overall, but it depends on your needs.

Check out our Roland F701 review

The KDP120 provides a slightly cheaper alternative and one of the most luxurious grand piano tones. The downside is that it doesn’t match the versatility of the RP701.

Check out our Kawai KDP120 review

Who is the Roland RP701 best suited for?

It suits players of any level who want a realistic piano feel with a vast number of available sounds (ideal for songwriters and composers). 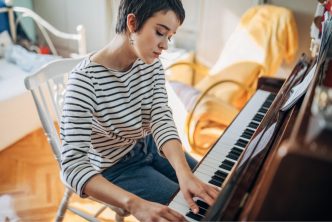 The 12 best EASY piano songs for beginners to learn