Today, we will be reviewing the RME Babyface Pro FS, a rock-solid, 24-channel interface with a pristine sound and stunningly stable clocking abilities. The unit is small and compact, and extremely well made. So, let’s take a look at what makes this interface so great.

Our verdict on the Babyface Pro FS 4.6

RME’s Babyface Pro FS is a solid improvement of the unit’s past iterations. What little flaws there were to find in the original Babyface and Babyface Pro have all but faded, and the interface’s performance is top-notch.

You won’t be disappointed with the Babyface Pro FS, and we simply can’t recommend it enough.

The general setup here remains largely unchanged from the original Babyface. The unit has four analog inputs – two on the back panel, which can function both as XLR and line inputs, and two more line inputs located on the right side.

Directly next to these line inputs are two headphone outputs, one accepting a full-sized 1/4″ jack and the other a mini-jack. Over on the left-side panel, you’ll find optical I/O, a MIDI I/O, a 12 V DC power supply as well as a USB socket.

The Babyface Pro FS also shares the same clocking circuits as RME’s ADI-2 Pro AD/DA converter, offering amazingly accurate clocking without having to shell out another $1000 or so for a dedicated unit.

Beyond all this, you’ll be able to take advantage of a 288-channel mixer with 46-bit internal resolution with RME’s bundled software – TotalMix FX, which provides latency-free processing, as well as a 3-band EQ and other mixing effects.

All around, the Babyface’s performance has been upgraded in each aspect of its design. The unit’s microphone preamps have been slightly improved, now sharing an SNR of 113.7 dB rather than the original’s 112.2 dB. The line inputs have also been improved, now featuring an SNR of 116.3 dB while also enhancing the THD by 8 dB.

On the bottom of the unit, there is a switch to reduce the interface’s output level by either +19 dB or +4 dB. This is an incredibly useful added feature that can help you to avoid any trace of distortion in your recordings.

The Babyface Pro FS is capable of being incredibly transparent in its recording capabilities. The original Babyface already offered full and warm recordings, and the upgraded features only strengthened its performance.

You’ll find that the Babyface is perfectly accommodating for any studio setup. It’s great for anybody with a smaller setup, but its economical size can also prove useful for anybody who’s studio is slightly more extravagant.

You won’t need to worry about it taking up half your desk, and its reliability for high performance makes it a perfect option for anybody. However, if you are looking for more connectivity, there may be better options available.

The design of the Babyface Pro FS makes it a great addition to any mobile recording situation. It’s lightweight and compact, and it even comes with its own case with cable slots in order to protect it during your travels.

The unit is rather small and the circuits are all well protected in an aluminum frame. Its top panel slopes up slightly to the back so the controls are more naturally faced towards the user. While the unit is lightweight, its design is robust and solid.

Once you purchase the Babyface Pro FS, you’ll also get access to a variety of different software to help you hit the ground running in your recording.

You’ll get access to TotalMix FX as we already mentioned, along with several other interesting plugins to experiment with. First of which will be Scuffham’s S-Gear guitar amp simulator – an incredibly powerful software to help bring your guitar sounds to the next level.

You’ll also receive some plugins from BrainWorx, namely a compressor and a reproduction of a high-end analog mastering system.

On top of all this, you’ll also get trials for Modartt’s Pianoteq 6, GG Audio’s Blue 3 Organ, and a two-week full version of Gig Performer.

Even though the Babyface Pro FS could be a great choice for anyone, we’d be remiss not to inform you about the other options available. Here are some alternatives for you to compare against before making your final decision.

The Babyface Pro FS is far more portable than the Clarett but has much less I/O capabilities.

Just as the Babyface comes with TotalMix FX, the Clarett comes with Focusrite Control – both of which allow you to configure your internal routing. They roughly do the same job, but TotalMix FX comes with far more effects and channels that may make up for the fact that it has fewer onboard inputs and outputs.

They’re both incredibly solid choices depending on what you’re looking for, but our allegiance currently stays with Focusrite.

The Twin might be the closest comparison to the Babyface to consider. They both are extremely portable, high-functioning units that sound absolutely fantastic.

The strength of the Apollo Twin Mk2 is that it has built-in UAD processing, allowing you to record through several UAD plugins in real time without overloading your computer’s CPU.

Still, the units are otherwise tied for their performance, so we’ll have to leave the decision to you.

The Arturia is far more affordable than the Babyface. However, while optically similar, the performance of the Babyface has the upper hand.

They’re more or less very similar in a practical sense but the drivers and sound of the Arturia leave a lot to be desired in comparison. We’ll go with RME on this one.

For more great options, check out our recommendations for the best audio interfaces on the market right now. 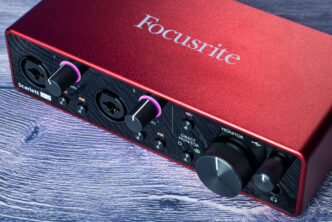 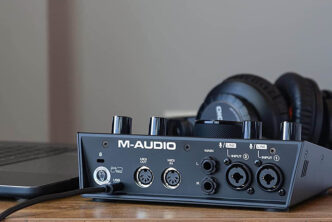 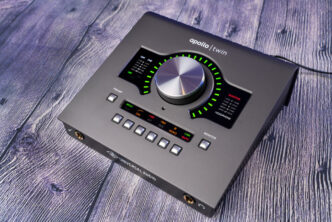