Novation’s Launchkey first appeared in 2013 and has seen some significant changes since then. The Launchkey 25 Mk3 is a sleeker, better-performing version of its predecessors.

Novation’s Launchkey first appeared in 2013 and has seen some significant changes since then. The Launchkey 25 Mk3 is a sleeker, better-performing version of its predecessors.

The Novation Launchkey 25 Mk3 is a 25-key MIDI controller with plenty of features. Its small stature makes it ideal for bedroom producers, especially Ableton users.

The first feature you should notice when you see the Launchkey 25 Mk3 is that it has full-size keys. Keyboard controllers this small usually have mini-keys, like the Launchkey Mini Mk3.

It comes with 16 velocity-sensitive pads, which is a good amount for a small controller. While the pads aren’t quite MPC or MPK quality, they are larger and much more responsive than previous models.

Above the pads, there are eight fully assignable rotary knobs, and to the right are some dedicated transport controls. To the left of the keys, you have pitch and mod wheels that are definitely more accurate than previous models.

Novation has added a few new features this time around, and the two that stand out most are Chord modes and Mutate. Chord modes allow you to trigger chords from a single note using the keys or pads. The Mutate function re-arranges your patterns, which is excellent if you are short of inspiration.

On top of the new features, some previous features have been enhanced, like the arpeggiator, which is now more powerful than before.

It has a small but very useful backlit LCD screen on the top left corner. It also has some nice one-touch features for Ableton users, like dedicated Scene Launch and MIDI Capture buttons.

The Novation Launchkey 25 Mk3 is undoubtedly best suited to Ableton users. So, if you are a longtime Ableton user, it’s a no-brainer. It might not seem like much, but having even a handful of dedicated buttons and controls can improve your workflow dramatically.

If you aren’t an Ableton user, all is not lost. The Launchkey 25 Mk3 is fully-compatible with all major DAWs; however, the ease of integration varies. For Logic Pro and Reason, there is full integration and auto-mapping. But, for other major DAWs, it provides native functionality only.

Of course, all of the controls are fully assignable, so you can map them any way you like for any DAW you want. It’s just a little more time-consuming, that’s all.

Once you are past all of that, having eight rotary knobs, 16 pads, and transport controls do give you a lot of control over your DAW/plugins. Some 25-key controllers have 16 assignable knobs, but fitting in more than eight is difficult when you have full-size keys.

Anyone using other DAWs will have better options, in our opinion. However, one thing the Launchkey 25 Mk3 has in its favor is full-size keys. If you have a small home studio, there aren’t many keyboards that will let you fit full-size keys into such a small space. We like that there are 16 pads, too, because that speeds up any loop/clip-based production.

Novation has added a MIDI output on the back panel, too, so you can now control external gear from your Launchkey 25 Mk3. As we often say, MIDI keyboards tend to be the central piece of equipment for most home studios. So, the more external gear your controller can talk to, the better.

The huge positive for the Launchkey 25 Mk3 in this area is the full-size keys. We have said it already, but being able to pack full-size keys into a backpack-sized unit is fantastic. Beyond the fact that it’s easy to get around, there is a massive performance boost that comes with full-size keys. Mini-keys can be tricky if you aren’t used to them, and on stage, you might risk a few bum notes here and there. The Launchkey 25 Mk3 takes away that problem.

Ableton comes into it again here because if you are using it live, you’ll be using a laptop, and we’d suggest you’d get the most out of it through Ableton. You’d get the smoothest performance, at least.

If you wanted to use this controller just to control a virtual instrument (or a few), like synth bass, it would do it as well as any other one. Our issue is that there are cheaper options available if you aren’t going to get the most out of the Launchkey 25 Mk3 with Ableton.

The build quality of keyboard controllers this size is never going to be rock-solid. What we look for are things like wiggle/movement in the rotary knobs, buttons, etc. All buttons and knobs here are very stable with minimal movement. It shows a significant improvement on previous builds.

The unit as a whole is much sleeker than it used to be. It has sharper edges that not only make it look great but feel great too. It seems the new, more compact/tight shape makes it a more robust unit with less flex in the plastic casing.

As you’d expect, the Launchkey 25 Mk3 comes with a free copy on Ableton Live 10 Lite. We have pointed out several times that it’s more suited to Ableton users, but if you are new to DAWs entirely, then it’s a great controller to get started.

You also get Serato Sample LE, which we think is a fantastic addition. It makes sampling and editing samples easy, and it’s a great way to learn. You won’t be short of samples either with a two-month Splice Sound membership.

As for virtual instruments, you get Spitfire Audio LABS Expressive Strings, and if you haven’t used Spitfire Audio libraries before, you’re in for a treat. Upon product registration, you get to choose one of XLN’s Addictive Keys instruments, which are pretty high-quality.

You aren’t short of effects plugins either with Klevgrand ROVerb, DAW Cassette, and AAS Session Bundle. Novation owners also get access to Sound Collective, a community offering freebies and massive discounts on plugins.

Launchkey 25 Mk3 vs. other keyboard controllers

25-key MIDI controllers, more often than not, have mini-keys. So, there are fewer options when it comes to full-size keys, but here are a few that we like.

M-Audio’s Oxygen Pro 25 is a little more expensive, but we think it’s a more versatile controller for the extra money. We also believe the pads feel and perform better.

The Alesis V25 is fantastic if you want something cheap with full-size keys. However, the layout isn’t ideal, and if you need more than just cheap full-size keys, the Launchkey 25 Mk3 is better.

The Impact LX25+ is cheaper, probably more versatile, and does most things that the Launchkey 25 Mk3 does. The downside is that it only has eight pads, and that could be a deal-breaker.

We might seem like we are being pretty harsh on the Launchkey 25 Mk3. But, the reality is that it’s a great controller, and if you use (or want to use) Ableton, we highly recommend it. We just need to look at value for money and versatility across the board, and that’s where it falls short if you aren’t an Ableton user. 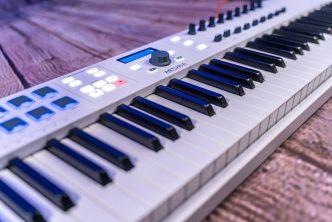 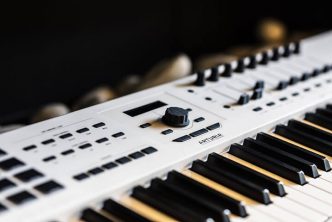 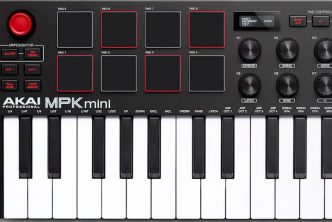 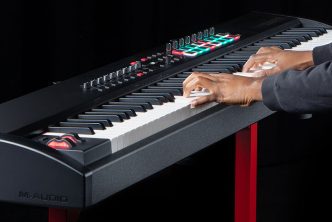