The KDP120 is a new digital piano from Kawai that comes with some improvements over previous models. Like previous Kawai instruments, the main focus is on creating an authentic piano experience.

When it comes to buying a digital piano, Kawai is a pretty safe bet. It’s very unlikely that you’d buy a Kawai digital piano and be unhappy with it; they are that good.

What it comes down to are price and features. Sitting at a mid-level price, the KDP120 is a serious investment, which means it has some serious competition, too.

We think it’s worth every penny; it’s a beautiful piano. But, do your research before you buy.

It suits every level of player, from beginner to professional. However, it may be priced a little outside of the beginner’s budget.

Here are some of the main features of the Kawai KDP120.

The Kawai KDP120 features an internal 3-track recorder that allows up to 10,000 notes. It’s similar to many digital piano recorders in this price range; it’s great for recording ideas or tracking your progress.

There are some built-in effects that are all geared around making the piano sound more authentic. Sonic Enhancement effects include six Reverb types, Brilliance and Low Volume Balance.

The Low Volume Balance feature lets you play at lower volumes without losing the expression and dynamic quality of the piano.

Pianos are precision instruments, and Kawai’s Virtual Technician app helps you get your piano performance-ready.

It allows you to do a full technical setup of the piano, including parameters like Touch Curve, String Resonance, Hammer Delay, and Temperament.

Obviously, some parameters have a more significant effect than others, but even the small details matter. One of the cool things about the app is that it allows you to save custom setups, along with offering presets. Custom setups are beneficial for playing different types of music or more than one player sharing the instrument.

The KDP120 comes with Kawai’s Grand Feel Pedal System. That means you get a proper three-pedal setup with Damper, Soft, and Sostenuto.

The system has half-pedal support for more realistic and accurate control. To add to the realism, the piano simulates Damper resonance just enough to be authentic without getting in the way of your playing.

Along with the Virtual Technician app, you can make use of the PianoRemote, and PiaBookPlayer apps.

The PianoRemote app basically creates a remote control for your piano. It allows you to access and control piano functions from a remote device like your smartphone or tablet. It can come in handy when using a tablet because the app’s GUI makes it easier to navigate sounds quickly.

The PiaBookPlayer app accompanies the onboard piano lessons, allowing you to view notated scores.

These speakers are as powerful as most in the price range. More importantly, they deliver impressive clarity and detail.

These modes are perfect for duets or teacher/student playing if you want to create two equal zones across the keyboard.

Starting with the negative, there are no audio outputs at all (other than headphones). It’s not a huge deal, but it’s nice to have the option should you need it.

It offers MIDI via USB and Bluetooth connectivity.

The best thing in this area is that it comes with two 1/4″ headphone jacks. It’s remarkable how many digital pianos offer some sort of duet mode but don’t provide dual headphone jacks.

The Kawai KDP120 has a total of 15 sounds, but the star of the show is undoubtedly the SK-EX concert grand.

Kawai is one of the very few digital piano makers who have a genuine pedigree in producing truly world-class concert pianos. It’s then about how you recreate that experience in digital form, and Kawai’s Harmonic Imaging technology does so with stunning detail.

There are four piano sounds in total, including a Mellow Grand, Studio Grand, and Modern Piano. Without sounding like a sales pitch, it would be very unusual to have any complaints about Kawai piano tones.

The other sounds are pretty interesting, too. Not only are they high-quality, but they include some unexpected options, like the New Age Pad, Choir, and Atmosphere.

The rest of the sounds include the usual suspects, electric piano, organs, harpsichord, etc.

For a small number of sounds, they are surprisingly versatile, and the overall quality is excellent.

The keyboard feel is an area where Kawai has made some improvements since previous models.

The improvements come from the advanced hammer-sensing key detection, which accounts for every slight movement of a key. When playing a real piano, the upward motion of a key is just as important as the downward motion because it affects how the hammer strikes. Kawai has done well to create that feeling of complete control that comes from being able to articulate the most subtle nuance in your playing.

As expected, the keys are graded, meaning the bass notes are heavier, and the treble notes are lighter. The actual keytops aren’t as luxurious as some more expensive models, but overall, the weight and feel are fantastic.

The layout follows the trend with digital pianos that don’t want to have a clustered panel above the keys. Instead, it makes use of the small space at either end of the keyboard.

As well as looking tidier, this format also prevents the piano from becoming too bulky. The power and volume controls are on the right, with the main function controls on the left.

Function buttons include demo/lesson selection, recording controls, metronome on/off, and sound selection. Despite the layout being so straightforward, it might be best to use the PianoRemote app when possible since there are so many lessons and demo songs.

The KDP120 is a piano that anyone should love to have in their home. It comes in a few finishes, including premium rosewood, and it looks gorgeous.

The slimline cabinet has also seen some improvements, like the smoother sliding lid. It comes with a matching stool that gives it a more professional look, too.

As far as sound/feel quality for home practice goes, it ticks every box. It’s more than enough for professionals, and it has the key features that any beginner needs (including dual headphone jacks).

The KDP120 is the kind of digital piano that small venues might want to use as a house piano. It could be a jazz club, open mic nights, or small recital hall, etc.

In many situations, it would be perfect. It provides the required sound and feel without the upkeep of an acoustic piano. It’s fair to say the built-in speakers would be enough for many smaller situations, too.

Once you need a bit more power, you run into the problem of not having a dedicated audio output. Many people are happy enough taking audio from a headphone jack into a PA system or external amp. But, that won’t be ideal for everyone.

When you get to the real high-end digital pianos, we’re talking thousands of dollars, you can see a significant difference in build quality. The KDP120 isn’t at that high-end, it’s more of a mid-price piano, and it’s important to judge it as such.

In our opinion, Kawai digital pianos usually look great, so it’s easy to get carried away and start comparing them to instruments that cost twice as much.

In this class, the KDP120 is very well built and does show some design improvements over older models.

If it isn’t top of the class, it’s close to it.

As we already said, the KDP120 is a serious investment, so it’s vital that you check out the competition before buying.

The RP701 is a far more versatile piano, boasting a massive 324 sounds. But, if it’s the grand piano that matters most, we prefer the KDP120.

Another new digital piano from a manufacturer with a great reputation. We don’t like how bulky it looks, but it’s worth checking out if that doesn’t bother you.

We really like this Korg as a stylish digital piano choice. As much as the slim design wins us over, it doesn’t feel or sound as good as the KDP120.

The 7 best Yamaha keyboards and digital pianos in 2022 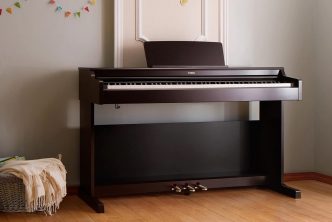