The unit has proven to be exceedingly popular among entry-level musicians, and each new iteration has steadily improved upon the former’s successes.

Our verdict on the Scarlett Solo 3rd Gen 4.8

The Focusrite Scarlett Solo 3rd Gen is a no brainer for entry-level recording engineers.

The unit’s amazing recording quality, solid preamps, and agreeable price point set the Scarlett at the top of its class. We just wish it had MIDI I/O.

On the front panel, you’ll find an XLR input as well as a TRS input.

The XLR input is equipped with both 48 V phantom power as well as Focusrite’s signature Air mode (which we’ll discuss later), and the TRS-in has a switch to toggle between instrument and line level.

Each channel has an illuminated LED gain dial, which changes from green to red when the signal begins to peak.

The same LED illumination is utilized in every switch to signal when they are being engaged.

Located on the right of the front panel is the master control dial, as well as a quarter inch headphone output, and a direct monitoring switch.

The rear panel is simple, featuring only a USB-C port and two balanced studio monitor outputs.

The Solo’s A/D converter captures audio at 24-bit depth and has a maximum sample rate of 192 kHz.

It also has a fairly respectable dynamic range, reported at 111 dB, 110.5 dB, and 110 dB for the XLR-in, line input, and instrument input, respectively.

As a custom, the unit features Focusrite’s signature Air mode on the preamp for the XLR input.

While you may already be familiar with it, the preamp’s design was custom-made by Focusrite founder, Rupert Neve, sometime in the mid-80s.

The effect essentially sets a filter on your preamps which boosts the mids and highs of your recording signal, adding a bit of life and brightness while you track.

In the case of the novice engineer, the Solo offers plenty of flexibility for bedroom recording artists. The interface is small and compact, and won’t take up too much space on your desk.

It’s hard to knock it, considering that people who want an interface with more connectivity are most likely not researching entry-level units like the Solo.

If anything, MIDI I/O would make the Scarlett Solo a no-brainer for most people.

While limited by its connectivity, folks in need of an easily transportable unit will find the Scarlett more than adequate for recording on the go. All you need is a DAW and a USB-C.

The Solo is perhaps as rugged as it needs to be. It’s fairly solid, lightweight, and wrapped in an aluminum housing.

There is a bit of give with the inputs, but not enough to deter us from recommending this audio interface.

All in all, not too shabby.

At a quick glance, the AudioBox seems to have just about everything to make it the superior choice to the Scarlett Solo: two combo inputs, MIDI I/O, a direct monitoring control knob to blend your signals, etc.

Then you look at the specs and realize that it only has an A/D resolution of 24-bit/96 kHz. Opt for higher fidelity and get the Scarlett.

The Komplete Audio 1 is slightly cheaper, feels a bit more solid, and has a direct monitoring knob to blend between what’s coming from your DAW and your direct input.

They’re equal in terms of performance, but we would personally recommend the Komplete. You can’t go wrong either way though.

In the case of opting for the UMC202HD, it has two XLR/TRS combo inputs and has all the same features and performance capabilities as the Scarlett.

On the other hand, it’s a Behringer unit. Pick your poison.

The Audient is more expensive, has a lower max sample rate, and looks utterly ridiculous.

Check out our Audient Evo 4 review

Who is the Focusrite Scarlett Solo 3rd Gen best suited for?

The Scarlett Solo is best suited for entry-level engineers, and/or folks in film or gaming who just need two inputs and playback at 192 kHz.

The 7 best budget audio interfaces in 2022 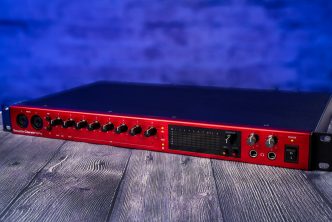 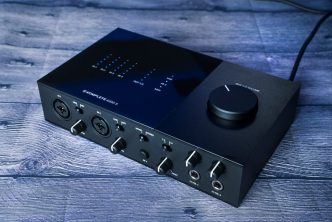 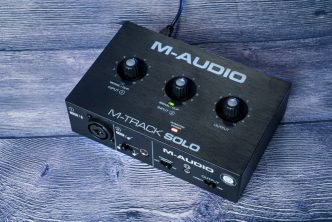