Finding the right songs for kids to learn is as important as choosing the best keyboard.

Some children will display a rare inherent ability to understand the most complex musical ideas from a young age. But most kids need a little extra help, and it’s not about a lack of potential, it’s about making music fun and keeping their attention.

Kids have incredibly creative minds that often come with very short attention spans. If you can make music something they want to do, rather than feeling like homework, you might have a piano prodigy in the making.

Our songs include nursery rhymes, cartoon themes, and even some Beethoven.

These are the easiest piano songs for kids to learn:

It wouldn’t feel right to make a list of easy piano songs for kids to learn without “Twinkle Twinkle Little Star”.

It’s good to know a little about the origins of any song, but what’s most important in this context is that “Twinkle Twinkle Little Star” is sung by or to millions of children around the world every single day. It’s about as familiar as it gets.

Musically, it’s not too challenging, which is great for kids, but it does have some educational elements.

For a start, it’s one that kids are likely to sing as they play, and that’s an important skill to develop early. It’s also a tune that can be used as a practice tool for all levels.

As kids improve their piano skills, they can continue to learn more complex arrangements of this song using techniques learned along the way.

The best thing about it is perhaps that it provides an immediate sense of achievement that leaves them wanting more.

For kids, what’s cool and what’s not can change multiple times daily, making it hard for adults to keep up. But, in recent years, very few cartoon theme songs have captured the attention of children worldwide more than “Baby Shark”.

It’s also one of the most annoying for adults, so parents, get ready to hear it on repeat; we apologize.

Maybe surprisingly, for some, we do actually have a music reason for including “Baby Shark”. The notes that make up the instantly recognizable melody come from the pentatonic scale.

If we break it down and take the first syllables of the lyrics, which are BA – BY – SHARK, we get the fourth, fifth, and first (octave) notes of the major pentatonic scale.

You can use those same notes to create intros and turnarounds; they are the foundation of basic improvisation in many genres.

“Baby Shark” also transposes often, which teaches kids that they can play the same thing in every key. So, kids will learn while having fun, and parents will need some good earplugs.

At the risk of upsetting millions of children, we don’t think the SpongeBob SquarePants theme song is the catchiest tune, at least not at first.

It’s one of those tunes that grows on you, then you can’t get rid of it, like a jingle from an annoying TV commercial.

But we don’t need to love it, kids do, and they will love to learn it on the piano. We chose this song not just for the TV show’s popularity, but also because it’s easier than it sounds. It has more notes to play and a faster tempo than much of our list, so it might sound like a tall order at first.

However, the notes/intervals in the melody shouldn’t be too much of a stretch for small hands, and it’s very repetitive. Once the notes are right, it’s about focusing on the rhythm, and there are one or two rhythm changes to tackle.

We believe it’s a challenging song for young beginners but not as tricky as they might think, and completing it will be very rewarding.

“Ode to Joy” comes from Ludwig Van Beethoven’s Symphony No. 9, which he performed for the first time in 1824.

“Ode to Joy” is a symbol of unity, peace, and hope, and it’s used so often that most people know it even if they don’t realize it.

It doesn’t sound like the most exciting prospect for children new to the piano, it’s not linked to a superhero or cartoon character.

These simplest melodies are usually the best because you can whistle, sing, or hum a simple melody. When a melody becomes too complicated, it becomes less memorable.

“Ode to Joy” has one of the most memorable melodies you’ll ever hear; even easily distracted kids will struggle to forget it.

It’s also a chance for kids to work on playing with both hands because there are no difficult rhythms, which means they can add some lovely harmony to the famous melody.

Once young pianists realize they can comfortably play songs with both hands, there’s no stopping them. And it’s possibly the least intimidating introduction to classical music we can think of for young ears.

You Are My Sunshine

“You Are My Sunshine” is similar to “Twinkle Twinkle Little Star” in that it’s sung by or to millions of children every day. It’s universally known, and it’s just a very happy little song.

Apart from being a fun song for kids to learn, it’s another one that they can sing along with as they play. The melody shouldn’t be too tricky at all because it’s very straight with no quirky phrasing or timing issues.

There aren’t any awkward stretches either, so small hands won’t have any problems getting around the notes.

We chose this song because it’s the perfect tune to introduce a simple bassline in the left hand. We call it a power chord when we simultaneously play two notes that are a fifth apart on the left hand to accompany the melody.

But, to make it more interesting, we can play the same notes melodically (individually), rocking back and forth between the root note and the fight above.

When we repeat that pattern, it provides harmony and rhythm, which develops hand independence. We love techniques like this one for kids because they realize they can apply the same skill to lots of different songs.

We’re finishing with one of the most-loved and fun piano pieces ever, “Chopsticks”.

“Chopsticks” has been featured in TV shows and movies, most notably the film “Big” with Tom Hanks, which took the song’s popularity to another level.

We have a few good reasons for adding this song to our list, starting with the fact that it’s a lot of fun. There’s something about “Chopsticks”, you can’t help feeling happy when you play it on the piano.

It also introduces some new aspects of playing, like two-hand unison and the left-hand switching between melodic and harmonic accompaniment.

The main melody is simple but requires a steady and controlled rhythm (at first). One common occurrence when playing “Chopsticks” is that pianists will rapidly increase speed on the final chorus until they finish or go so fast they can’t make it; we encourage trying it when ready; it’s a lot of fun.

The main reason we chose “Chopsticks” is that this list is for kids, “Chopsticks” was composed by a teenager (Euphemia Allen in 1877), and it can be a duet. One person can play it alone, but why not get your piano fingers ready, parents, and take turns playing the melody and accompaniment?

If we know one thing about kids and music, they learn more when they enjoy it. Our selections are songs kids will be excited to learn and enjoy playing. Most importantly, they will learn while having fun and develop techniques they can apply to other songs.

If our picks give a few parents a headache, we’re sorry, but it’s worth it! 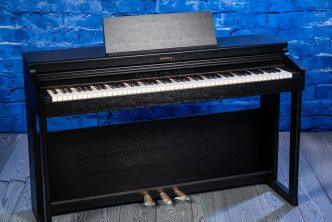