It’s been a hard year and we are all looking for the cheapest way to make music that we can find, which is why we’re bringing you this list of the best free VST synth plugins around!

Some of these synths have specific uses, and some are all-purpose music machines, but all of them are high-quality tools to help you produce your music. Take a look!

These are the best free VST synths right now:

The best synth money doesn’t have to buy

It seems unbelievable that Vital is free. This synth is number one by a mile, largely due to the fact that there are expensive, complicated synths that can’t keep up with this one. It’s just amazing!

Some things to love about Vital are its three oscillators and one sampler, two stereo-splittable filters, and one-of-a-kind vocoding processing.

This synth was designed to talk, but is capable of just about anything you can imagine. It has a super-simple modulation setup in the form of a click-and-drag model, where you can assign LFOs, envelopes, and even frequency modulation to nearly any parameter.

If you’re familiar with Serum, this synth will feel like home to you. It operates in pretty much the same ways, with the layouts being quite similar as well.

It follows, then, that this synth can do just about everything Serum can do, but it’s free. FREE. How cool is that?

If you do want to support the developers and have the means to do so, you can purchase different packages that include more wavetables, more presets, a text-to-wavetable feature, and if you subscribe, you can get first access to their new plugins and features when they roll out.

But if you just want to use an awesome, capable synth, you can leave your wallet at home!

Surge is well-known in the music production community due to it being open-source, meaning that it’s free and you can actually download the source code and modify it, and that it comes with a huge bank of sweet presets!

The actual interface of Surge is not the greatest, and can certainly throw off some beginners, or people not familiar with synthesis, but with some practice, it can be a powerful instrument.

One cool thing Surge is that it lets you toggle between scenes, which are basically just two different versions of the synth, which could be great for live performances, or just auditioning sounds.

Spec-wise, it’s got three oscillators, two individual filters, a few LFOs, and plenty of other ways to modulate the sound, though nothing super innovative, like the vocoder stuff in Vital.

Again, the interface looks pretty different from what most VST synths on the market look like, but if you have any experience with coding, it may be a similar user experience for you.

From the creator that brought you Vital, Helm is an amazing synth for the first-time synth user and the experienced veteran alike. It’s got all the parts that make a good synthesizer, plus a sequencer and an arpeggiator, as well as a poly LFO.

Our favorite thing about this synth is the simplistic interface, which is laid out in a way that’s easy to understand. There’s nothing flashy about it, but that’s alright!

Featuring a full four oscillators, including dedicated sub and noise oscillators which is always a plus, Helm is fully stocked to be your first synth, your favorite synth, or maybe your last synth.

There’s not much it can’t do, and it has plenty of ways to be creative. Helm is a solid choice for any purpose, but is especially accessible as a gateway into the big, bright world of synthesis.

Here’s a synth that came about after a discussion on a forum between a couple of producers. They were talking about what features would be on their dream synthesizer, and someone decided to make those dreams a reality.

Before you scoff at this synth only having two oscillators, it’s worth noting that a lot can be done with just two oscillators, especially with a noise generator, a sub, and a ring modulator, a feature yet to be seen on the other synths above in this list as a standalone modulation option.

If you really want to see what this synth is capable of, you can check out the many, many presets, including downloadable user-made ones posted online. You can’t underestimate a synth like this, though it seems basic on the surface.

A new take on subtractive synthesis

If you heard that this synthesizer only has one single oscillator, yet was a favorite pick among many producers, would you believe it?

Zebralette takes a single oscillator and pushes the boundaries of what a synth can do. It boasts a unique style of creating a wave shape, which is a 64-step wavetable editor, and up to 16 frames for different wavetables.

Then, it offers four different modes for you to travel between the different frames, which are GeoMorph, SpectroMorph, GeoBlend, and SpectroBlend.

What happens in between frames is the real magic of this synth, and playing around with all the different waveshapes, morph modes, and other modulations this synth has will net you some one-of-a-kind sounds that you simply won’t hear anywhere else.

If that seems like too much, fear not! It also comes with presets.

FM synthesis, also known as frequency modulation synthesis, happens when a carrier signal (which you hear) is modulated by a modulator (which you don’t; or maybe you do. Up to you!) based on its amplitude.

Basically, the modulator is acting as an LFO that controls the carrier wave, but instead of a Low Frequency Oscillator, it’s a actually pretty high frequency oscillator.

This type of synthesis was very popular when it was first created, largely due to the fact that it wasn’t as difficult as, say, granular or spectral synthesis. It also produced a number of fascinating sounds that entered the mainstream, and spawned a legendary synth called the Yamaha DX7.

This synth was all about using FM to get crazy new sounds, so when a near-exact replica of this synth came along in software form, needless to say it got people excited.

Dexed is a software FM synth that strives to be as close to its inspiration as possible, as it sure does come close! The sounds are just as wacky, and the interface is also surprisingly close.

If you haven’t seen an interface like this before, it would probably be a little like bringing a fishing pole to a skatepark. If that comparison made you go, “…what??”, then you get the gist.

This doesn’t look like a normal synthesizer, and it doesn’t quite function like one either. The learning curve for FM synthesis can be pretty steep, but don’t let that put you off; the rewards of learning are worth it.

The best free synth for EDM

If you’re in the world of EDM, or electronic dance music, then you probably recognize the name Deadmau5. Now you might be looking back at the name of this synth and seeing the connection.

Don’t let the simple interface fool you, this is a sleek, modern VST synthesizer capable of awe-inspiring sounds, iconic in the music of Deadmau5 himself. Two oscillators, two modulation units, two envelopes, an LFO, a filter, and some cool delay modulations combine in a powerful way to bring your sound design to the next level.

This synth doesn’t need lots of bells and whistles to be impressive, and what it has that other synths lack is just a good, solid foundation. It’s oscillators just sound really, really good, and the rest of its components are top-notch.

If you want different, you got it!

We’ll admit, this one caught us by surprise. We hadn’t heard of this one, much less tried it out, but reading about it for the first time was a treat.

Pendulate is based on double-pendulum technology, which lets you modulate parameters and waveforms in a whole new, wacky way. With two modulation parameters that control something called “chaos”, you can imagine how fun this is to use.

The interface looks amazing and intuitive, and also adds a lot of fun to the experience in the way it appears to paint routing options (or maybe it’s the pendulum?) across the screen.

There’s not too many buttons and knobs, but a few of the sections in this synth pique the interest, such as the Double Pendulum section and the Wave Folder section.

Please, by all means, give this free synth a go, and let us know how you like it! It’s released by Eventide Audio, which is notorious for creating audio equipment that is totally outside the box.

ModulAir is a modular synthesis. While this isn’t technically different from subtractive synthesis (the majority of this list), it offers a really interesting concept, which is that the routing is based on different modules that you can mix and match, and otherwise control.

There’s a bunch of modular synthesizers out there, with a popular form being the Eurorack, and this is an entire modular synth in a VST plugin.

Sequencers, filters, LFOs, mixers, envelopes, and more abound in this highly functional synth. This is the best modular synth VST if you want to flex your creativity by discovering new chains of modules. Endless combinations await you!

Don’t let anyone tell you that you need fancy, expensive gear or plugins to make great music. All the tools you need are right in front of you, and can come alive with practice and a creative mind.

Hopefully this list will give you all the tools you need to bring your imagination to life! 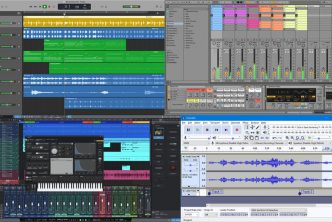 The 5 best free DAWs for music production in 2023

The 5 best DAW software 2023 for macOS and Windows users