We’ve all heard about the starving artist stereotype at some point or another. Musicians, in particular, have a knack for romanticizing such a flawed archetype, but that doesn’t mean we have to make it our reality.

If you do end up finding yourself trying to choose between eating or an expensive piece of audio equipment – please, go to McDonald’s and buy yourself some food.

Afterward, if you still have some money to spare, you can come back and read this list of the best budget microphones that won’t break the bank.

These are the best budget microphones to buy:

Coming in at number one on our list is none other than Shure’s SM58. These microphones have been the industry standard for decades and have been frequently used by countless artists both in live performances as well as in the studio.

They sound great, they’re barely $100, and to top it all off, these things are virtually indestructible. While the SM58 is most commonly used as a vocal mic, they’re perfectly capable of capturing electric guitars, and work well when recording toms as well.

Most professional studios will have at least a dozen of these on deck, due to their reliability and versatility in the studio, so purchasing this mic should be a no-brainer.

Here’s another no-brainer for you, the SM57. The SM57 is the instrument-focused counterpart to the Shure SM58, and as such, has been an industry standard for decades since the conception of its design.

The main difference that distinguishes the SM57 from the SM58, is in its grille design, or lack thereof. The SM58 had been built with vocal applications in mind, and therefore uses a ball grille with a built-in pop filter in order to manage any plosives from the singer.

The SM57, on the other hand, was tailored to be an instrument microphone and so the ball grille was omitted and replaced with something smaller, seeing that plosives were to be less of a concern. Other than this, the two microphones share the same cartridge and are equally reliable.

One of the most popular budget mics

While the AT2020 doesn’t share the same legendary status as the SM57 and SM58, its performance and sound quality make it one of the best budget microphones available, especially for beginners.

The AT2020 comes in two models: an XLR model, and a USB. The differences between the two aren’t very striking, but in general, XLR mics tend to be much more reliable than any USB mic you’ll find, mainly due to the shotty, built-in AD/DA converters within the USB mics.

That being said, the AT2020USB+ is still an excellent first microphone, and its converters are possibly the best we’ve seen on any USB mic. It’s very capable of holding its weight in small bedroom studio recordings, as well as in podcast and streaming applications.

All things considered, its great sound quality and affordability make the AT2020 a fantastic option to consider.

Check out our full Audio-Technica AT2020 review

The most versatile mic under $100

Unfortunately, the MXL 990 doesn’t get quite as much love as it should. If you’re looking for a well-priced vocal mic that has more character than say the SM58, the MXL 990 is a great option to consider.

Now, the comparison to the Shure SM58 doesn’t go very far at all, other than the fact that these mics are both great for vocal applications. The MXL 990, however, is a large-diaphragm condenser, not a cardioid dynamic. This means that it’s much more capable of capturing more intimate recordings than the SM58.

It’s also more versatile, and is great for vocals, acoustic and electric guitars, violins, mandolins, flutes, room sound applications, and the list goes on. Considering this microphone is just under $100, it’s easily one of the most professional-sounding microphones in its price range.

Check out our full MXL 990 review

For anybody looking to dive into the world of field recording, here’s an amazing microphone for you that won’t break the bank. The Tascam DR-05X is the slightly updated version of its predecessor, the DR-05. The main difference between these two microphones is that the DR-05X features a USB port so you can connect to your computer, and record directly into your DAW.

The DR-05X also allows you to use a microSD card to store up to 128 GB of files, which is a huge improvement from the earlier model in our opinion.

FINNEAS actually used this mic when recording Billie Eilish’s “&Burn”, so its usefulness in a professional recording environment has been well tested. For how inexpensive this microphone is, you really can’t go wrong.

A cheap yet solid mic

The AKG P120 is the marginally bulkier alternative to the AT2020. The benefit of going for the AKG is of course the fact that it’s a bit cheaper than the Audio-Technica microphone. In general, these mics offer more or less the same results in sound quality, and both are equally great choices for podcasters and streamers alike.

They have different sound characteristics so ultimately the decision is up to you, but we’ve found that the AT2020 sounds a bit brighter. This mic is definitely one of the best options for those of you who are searching for a solid, yet cheap microphone.

While this isn’t the cheapest microphone on our list, we think that it’s affordable enough to include. As far as kick drum and bass mics are concerned, the Beta 52A is easily the best option for anybody searching for a microphone that accurately captures low-end frequencies.

At a certain point in everybody’s recording career, they’ll find themselves asking, “Where’s the bass?” This is of course the point when buying a dedicated microphone for the cause becomes a necessity, and there really isn’t a better option than the Shure Beta 52A.

This mic has been time-tested and has rightfully earned its place as an industry standard. With a solid reputation for studio recording and its low-price point, you really can’t beat it.

Check out our full Shure Beta 52A review

There are so many more microphones that we could’ve included on our list, but writing out every single one of them would be next to impossible. So since we’ve covered the bulk of which microphones are best, it’s time for our honorable mentions.

For its low cost, the AKG P220 is well worth the price. Although it’s listed at $120, this microphone does not feel like a $120 mic. It feels incredibly sturdy, and the build is solid all-around.

This microphone sounds great on guitars and vocals and has a really pleasing response to mid-range frequencies. Its high-end response could maybe be a bit tamer, but if you’re looking to add some sizzle to your vocals, or percussiveness to your guitars, this microphone will prove itself to be very useful. All in all, the AKG P220 is a wonderful microphone for your budget.

The AKG Lyra is one of the most popular microphones for serious podcast hosts and streamers. Its relatively flat frequency response gives you highly accurate sounding recordings, without any serious peaks or dips while tracking.

The microphone also comes with the ability to switch between four separate polar patterns, making it an incredibly versatile microphone that you can use in a number of different settings and applications.

Its plug-and-play design allows for zero-latency monitoring while you’re recording, so whether you’re a beginner, an intermediate, or professional – the AKG Lyra’s performance will make recording a breeze.

The best microphone for under $50

Last on our list is the Shure SM48, the downgraded cousin to the Shure SM58. These two microphones share much in common and are for the most part equal in performance. However, considering the SM48 is nearly half the price, its frequency response suffers a bit, but not by much.

Where the SM58 can pick up from 50 Hz-15 kHz, the SM48’s frequency response goes from 55 Hz-14 kHz. It’s not so much of a difference, but a trained ear will be able to hear the difference.

Considering the fact that this microphone is only $40, it’s totally worth it. You’ll get pretty much the exact same sound as you would with the SM58 without paying an extra $60.

We know you love music, and we know you hate paying rent – but unfortunately, this is the reality we have to grapple with during the wake of late capitalism.

Hopefully, you’ll eventually find yourself thriving and able to buy every single piece of gear you’ve ever wanted. Whether it be a Neumann U 87 or that vintage $20,000 Telefunken U47 you’ve always dreamed of having.

However, even if these things never happen for any of us, there’s comfort in knowing that you can always just buy a perfectly great microphone for less than $100 and call it a day. 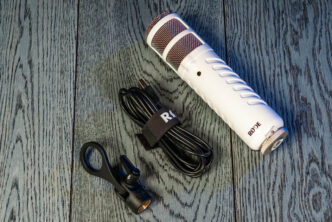 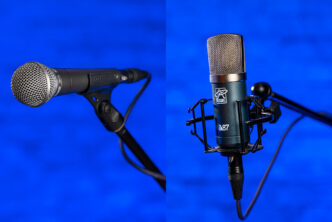 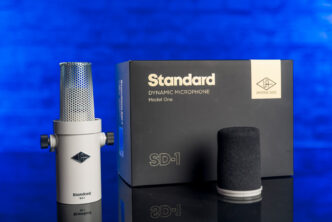